Does Europe need a renewables target? – yes, but it should be defined in terms of innovation

by Michele Peruzzi and Georg Zachmann on 23rd January 2014

See also working paper ‚When and how to support renewables? Letting the data speak‚

The discussion on whether the EU needs a new renewables target beyond 2020 is gaining traction. The proponents argue that a target for 2030 would give the visibility needed for long-term investments all along the value chain (e.g. into network and storage infrastructure). That is, without a firm political timetable for the roll-out of renewables, the cost of deployment might be much higher.

The opponents of firm deployment targets argue that having such targets under an emission trading system is overly costly (e.g., Robert Stavins) and that artificially high demand is creating excess rents in those parts of the value chain where supply is slow to react.

We think both sides have a point, but are missing out on one important aspect: innovation. Economic renewable energy technologies are pivotal for decarbonising our economies up to 2050. Long-term decarbonisation on a global scale will not be possible by just deploying the currently cheapest renewables technology. A system consisting of solar panels and storage in Germany is still about 10 times more expensive than an equivalent lignite-fired power plant. Bringing down the cost of the technologies to allow both industrialised and emerging countries to substitute fossil-fuel plants by renewables technologies is essential for enabling global greenhouse gas reductions.

In an upcoming working paper we evaluate the impact of (i) public research, development and demonstration (RD&D) subsidies and of (ii) public deployment policies on innovation and competitiveness. Our results indicate that both deployment and RD&D are increasing knowledge generation and improving competitiveness of renewable energy technologies.

Figure 1: Predicted diffusion of a hypothetical shock to German wind RD&D spending and deployment by one standard deviation each for all years after 2000 on German wind patents

If we look into competitiveness we find a similar picture. A hypothetical increase in German deployment and RD&D support for wind technology by one standard deviation from 2000 on would coincide, according to our estimates, with a substantial increase in the revealed comparative advantage of German wind turbines on the world market. Thereby, the largest effect comes from deployment.

Figure 2: Predicted diffusion of a hypothetical shock to German wind RD&D and deployment by one standard deviation after 2000 on German wind RCA 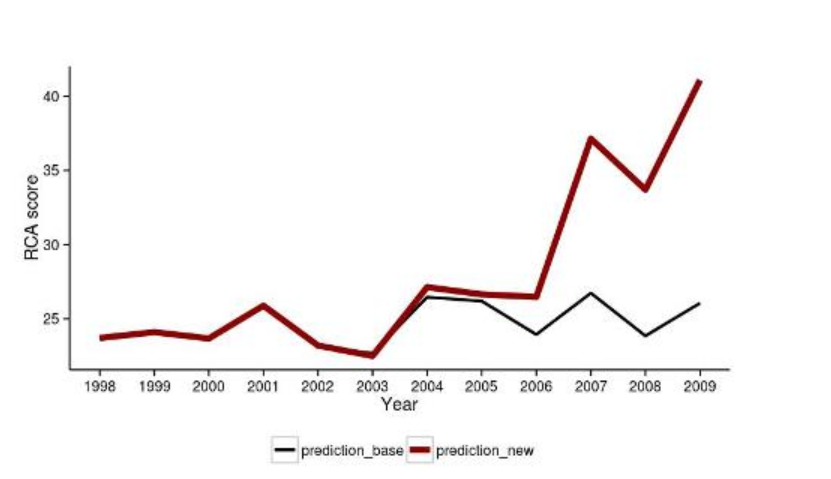 Note: We plot reverse ranking of Germany’s Balassa-Index for wind turbine exports, that is at one Germany would be the least competitive exporter of wind turbines in the OECD. At more than 28 it is the most competitive one. Finally, we find significant cross-border effects, especially for deployment. Increasing deployment in one country coincides with increasing patenting in near-by countries.

Figure 3: Predicted diffusion of a hypothetical shock to German wind RD&D and deployment by one standard deviation after 2000 on neighbouring countries wind patenting 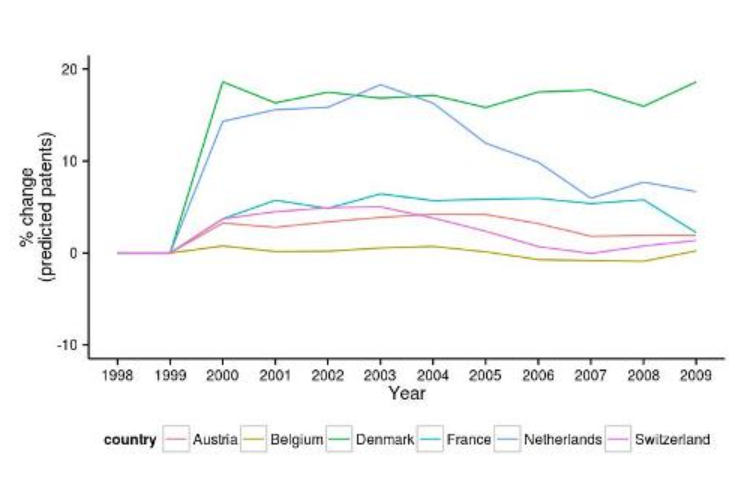 European policy-makers are focused on deployment

Based on the above-presented findings we argue that both deployment and RD&D support are needed to create innovation in renewable energy technologies. However, we worry that current support is unbalanced. Public spending on deployment has been two orders of magnitude larger (in 2010 about 48bn Euro in the five largest EU countries in 2010) than spending on RD&D support (about 315mn Euro). Yet, public RD&D support may be substantially more effective in creating innovation and also effective in improving competitiveness. Hence, we argue that focusing more on RD&D is essential to generate the new-generation technologies that are able to bring down the cost to a level where they can be globally deployed.

We have seen how deployment, unlike RD&D, seems to have substantial cross-border effects for innovation. These spill-over effects call for a better coordination of European and international policy. However, the current European debate is mainly about renationalising energy policies. Our findings are a case in point that Europe can gain from better coordination.

Need for a different type of target

Coming back to the initial question: ‘Does Europe need a renewables target?’ we believe that Europe indeed needs a target for renewables. But this should not be any more a target that encourages the uncoordinated deployment of existing technologies at all cost. The single most important benefit of renewables support is getting down the cost of future global deployment. Consequently, the European renewables target should be defined in terms of innovation. Europe needs a target that incentivises a well-balanced, timed and coordinated mix of deployment and RD&D policies for a wide portfolio of promising technologies.